Co-curated with Sarah Haviland. The artists in this show are here to remind us first of all of our “bird-ness,” of our bird-like aspirations, and our connection to all imperiled species as a first and consequent step toward action.

On the Mend: Installation by Lauren Bettini

An exploration of the female body, displaying themes of “women’s work” through accounts of women who bear scars, both physically and emotionally. This unique installation utilizes the entirety of the gallery, literally tying together embroidered large format photographs and wall-mounted sculptures. Photographs of women’s scars and detailed embroidery of surgical procedures are “mended” through the appearance of the physical act of sewing. Mounted three dimensional castings of women’s hands are used to symbolize a movement of women joining together to help heal each other.

Co-curated with Hyejong Grenier; Co-sponsored by the Korean Community Center, Tenafly, NJ. This exhibition seeks to address how Korean culture has transformed New York/New Jersey/Bergen County while overturning many stereotypes about Korean people and their lives.

Lines of Fire/Lines of Ice

If there is such a thing as an essential human nature, our nature is change itself.  This may be the single most important lesson of evolutionary theory, and for us, a source of hope. Artists have historically served as the conscience of humanity; now they may serve as the conscience of the earth itself.  This is the palpable hope behind this exhibition: art as an act of stewardship, a testament to a new reintegration of consciousness, body, and earth.

Belongings: Photographs at the Borders of Citizenship.

This exhibition pairs two sets of photographic records, two tragic experiences of people on two sides of the US border, separated by seventy-five years in America’s cultural and political struggle over who belongs and who doesn’t. At the heart of it is a collection of work by the renowned photographers Dorothea Lange and Ansel Adams and Clem Albers. Their images are part of the Library of Congress collection of the War Relocation Authority that hired these photographers to document the registration, processing and internment of 120,000 people of Japanese ancestry (over two thirds of whom were American citizens) in concentration camps in the West. Many of them – particularly those of Lange – were censored during the war and never seen until the 1970s.

This collection is paired with contemporary works by Chilean photographer Tamara Merino whose October 2018 photo documentary for National Geographic examined the plight of Central American, Venezuelan, and Cuban refugees who walked and hitched rides over 1,000 miles through Mexico to camp on the US border, hoping to obtain asylum in the US. This migrant caravan sparked a storm of political debate over immigration policies similar to debates that polarize political discourse in Europe. It continues today with the organization of an even larger caravan now making its way north through Mexico.

This exhibition seeks to surface the human element in an otherwise abstracted and obfuscatory debate, the stories of people who have had to pick up their belongings and move with their families – forced either by Executive Order or by conditions where life has become essentially unlivable.

Impounded: The Censored Photographs of Dorothea Lange and the Internment of Japanese Americans (2007) 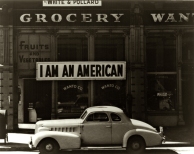 The Righteous: Jewish Uprising and Resistance During the Holocaust (2007)

Life in the Meadows: The People of Teaneck Creek (2007)

Jewish Uprising and Resistance in the Holocaust (2001)

Fire on the Mountain: Slave Rebellions in the Americas (2001)

Terra Infirma: Art and the Environment (2000)

Beyond Borders: Photography by Palestinian and Israeli Teenagers (1999)

One by One: Children of the Holocaust and the Third Reich in Dialogue (1998)